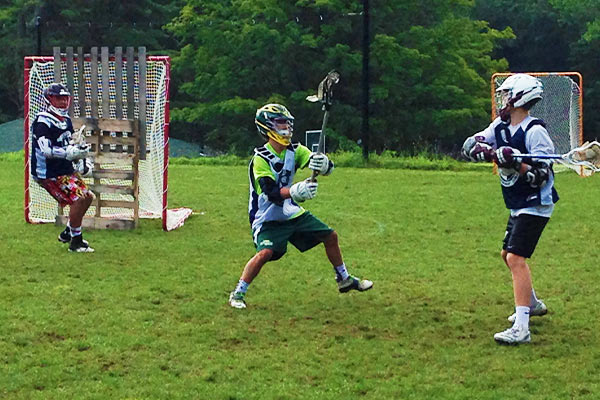 In order to be a successful lacrosse player, you need to master the fundamentals, including defense. It may not be as flashy as scoring goals, but defensive play is one of the most important areas for lacrosse players – regardless of age or skill levels.

Like in all sports, learning lacrosse defensive drills requires practice, clear instruction, and game-like conditions where players can hone their skills. When you have a team full of players who know how to play good defense in lacrosse, success follows.

The following five defensive drills provide great lax defense tips for players to learn and master. You can even team up and train with other players at a lacrosse camp focused on defensive drills. Practice with other elite players and coaches to develop a solid lacrosse defense workout routine.

Hundreds of times in every lacrosse game, a defender must close down an opponent with the ball. Knowing which angles to take will make all the difference. The defender’s positioning often determines whether they can prevent the offensive player from making a play.

The zig-zag drill helps a player learn how to approach the ball carrier and force them to move in the direction you want them to go, whether it’s down the alley, forcing them into a double team, or playing to their weak hand.

The drill places 7 or 8 cones in a zig-zag pattern. Players start at the bottom corner, sticks upright, and begin moving backward using wide lateral movements while keeping their body facing forward. At each cone, the player changes direction, keeping their stick in line with the direction they are moving. The drill can be done alone or in a group.

Zone defenses are critical to master for any defenseman. One of the best zone lacrosse defense drills to practice is the transition defense. The purpose is to train defenders on how to recover quickly and position themselves well ahead of attackers. The transition defense will help you beat attackers to the hole and stop them from getting off a shot.

Two attackers with the ball run to the zone. Four defenders race out to slow the attack, with two defenders preventing the attackers from setting up a fast break. The other two establish themselves in the middle to interrupt passing lanes or a fast break.

The idea is for the defenders to staunchly protect their zone and slow down the offense enough to allow help from the midfield.

Preventing a fast break is an important skill for any defensive player to learn. In this on-ball defense drill, defenders line up at the 5 and 5 mark. Offensive players are placed ten yards in front of the defenders.

This drill is good for conditioning and teaching the fine-motor defensive skills necessary for success in lacrosse.

This drill should have a limit on it. Depending on the fitness level, go for 30 seconds each, then switch. This drill is a great way to build muscle and defensive hand-eye coordination.

This simple drill starts with a defender picking up the ball and keeping their stick close to the ground. All you have to do is pick up the ball and rotate the stick while doing a toe drag. The drill creates soft hands and helps players turn their wrists over while retaining possession.