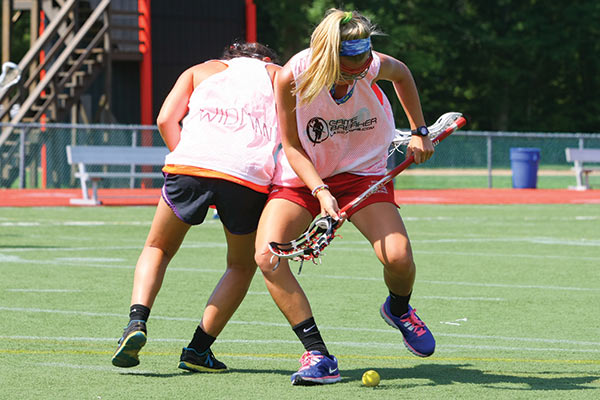 Lacrosse has become one of the fastest-growing sports in the United States. While participation in other sports has declined, lacrosse remains on a high growth trajectory, driven by increases at all levels of play. How popular is lacrosse?  Look no further than the playing fields in your community. Kids are trading in their baseball bats and football pads for lacrosse sticks and helmets.

The growth in the sport’s popularity has many contributing factors. There has been increasing growth in college and university lacrosse, with more programs being added across the country in recent years. At the pro level, indoor and outdoor lacrosse leagues are providing interest and engaging fans in family-friendly entertainment.

What Are The Biggest Lacrosse States?

Where is lacrosse most popular? While traditionally, lacrosse has been popular in the Mid-Atlantic and New England states, today lacrosse is played in every state. The growth has spurred the construction of advanced facilities, the availability of durable equipment, and the opportunity to play for anyone who wants to get involved.

What is the best state for lacrosse in 2022? That’s a tough question to answer, but here’s a look at five states where lacrosse has enjoyed a big gain in popularity.

New York has long been the host of great lacrosse at all levels. It’s popular across the state, especially in the Long Island and Westchester County areas, but enjoys competitive play in all corners of the state. New York has some of the most competitive high school lacrosse, with both boys and girls teams consistently being ranked among the best in the country. According to the National Federation of State High School Associations, New York has the largest number of boys (14,172 in 334 schools) and girls (11,964 in 314 schools) playing high school lax. Discover New York’s lacrosse camps for girls and boys across the state.

Massachusetts enjoys great success and participation throughout the Bay State. It features a large number of colleges that boast men’s and women’s programs and for many years the Boston Cannons were a major staple in Major League Lacrosse. Youth lacrosse camps in Massachusetts run all summer with some of the biggest names in lacrosse serving as instructors. There are options for boys’ and girls’ camps and overnight and extended-day sessions available.

When many people think of lacrosse in the United States, Maryland is the first state to come to mind. Lacrosse and Maryland are closely linked at every level, from highly competitive high school teams to club programs and of course colleges. Since 2005, Johns Hopkins (twice), Loyola, and the University of Maryland have all won the NCAA Men’s Division 1 National Championship. The University of Maryland is a powerhouse in women’s lacrosse, winning four national titles since 2010 and seven in a row from 1995 to 2001. See the selection of excellent youth lacrosse camps in Maryland to hone your player’s skills.

Illinois had 4,340 boys in 89 high schools and 2,950 girls in 64 schools playing lacrosse, according to the national data. According to US Lacrosse, Illinois was one of the states that was rapidly approaching 10,000 boys and girls players among all youth statewide several years ago, an indication of the sport’s popularity in the Midwest. Northwestern University boasts another powerful women’s lacrosse program, winning the national crown seven out of eight years from 2005 to 2012 (and reaching the title game the other year). Check out the options for youth lacrosse camps throughout Illinois.

With 10,189 boys and 9,840 girls playing high school lacrosse, California is second only to New York in participation. California offers a climate that’s ideal for playing lacrosse year-round, so it’s no surprise that lacrosse has become such a popular option for athletes there. The coastal state also offers countless colleges and universities with competitive varsity and club programs. There are also active adult leagues, so lacrosse is likely to continue growing in popularity as time goes on. For those looking to get some excellent instruction, there are several options for youth lacrosse camps in California.

Lacrosse Coaching and Camps Across the Country

One of the most powerful elements in the growth of lacrosse is the level of instruction offered at sports camps. These camps and clinics offer the opportunity for players of all ages and skill levels to learn the skills necessary to succeed in their sport. In addition, these camps allow players to find mentors, play competitively, and make friends with players from all around the country.

Some organizations, such as GameBreaker Lax Camps, host camps nationwide, so you can participate no matter where you live.

Camps that provide professional counselors have an added benefit compared to a local day camp. Experienced lacrosse coaches and players eagerly share their knowledge with players trying to get better. These camps are focused exclusively on a lacrosse population, with instruction designed for those who want to become more competitive and more successful in the sport. With the right camp, a player can learn life and people skills that will translate into their education, relationships, community, and sport.

Trust the experts. Camps that specialize in lacrosse know lacrosse. These camps offer a different mindset than generic day camps where lacrosse is one of several options available and the coaching is average, at best. Specialized camps have experienced staff ready to teach players at the basic, intermediate, and advanced levels. Players will see improvements in as little as one week. So, where can you find this level of passion and skill?

Finding the Right Instruction Is Key

Our camps focus on inspiring excellence, safety, and a healthy camp environment. For more than 20 years, GameBreaker has been the leading youth lacrosse camp source. To learn more, contact us today.