Lacrosse and Field Hockey are Different Sports with Similarities 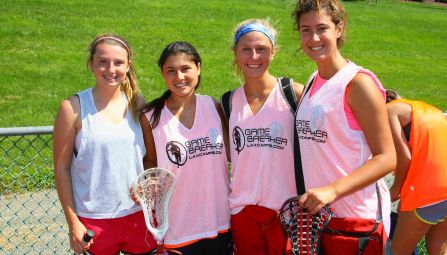 Many people believe Field Hockey and Lacrosse are the same game. The games do not have interchangeable gear or rules of play. To clarify, lacrosse is not the same sport as field hockey. While the similarities between field hockey and lacrosse are considerable, they are quite different sports. Field hockey uses a stick that is curved and is used to push the ball up a field. The goal in lacrosse is smaller, and you do not push the ball up the field but rather toss it between nets attached to sticks held by players. The pace of play in lacrosse is considerable faster and is played at a different time of year than field hockey.

Difference and Similarities Between Lacrosse and Field Hockey

Both games use a stick to accelerate gameplay. In field hockey, the stick has a hooked end, and the ball is moved along the ground. In lacrosse, the stick has a needed head and passing it through the air into nets moves the ball. Both games have a ball that is used in a goaltending system. Lacrosse balls are smaller in a circumference between 7.75 and 8 inches. Field hockey balls range in size starting at 8.8 inches with a maximum size of 9.25 inches. Lacrosse players usually wear eye protection because the ball is passed through the air, and they also wear mouth guards to protect their teeth from cross checking with lacrosse sticks. Field hockey players also wear mouth guards but instead of eyewear they usually have shin guards since most action happens one the ground. The strategy implemented in lacrosse is not the same as that used in field hockey. The strategies used for each sport is centered on how the ball moves in the game. In field hockey, the ball is moved with sticks on the ground; so the ball is passed through stick play utilizing players accordingly. In lacrosse the players swirl the ball in a net and jet it through the air, since the game is advanced using passing, players are used differently. Lacrosse is played during the spring and summer, and field hockey is played during the fall. Gameplay is divided differently. Lacrosse has quarters and field hockey used halves. Field hockey has eleven members on the field at one time and usually 15 people per team. Lacrosse has ten players on each team. There are three attackers, three midfielders, three defenders, and a goalie. In field hockey, there are four members on the forward line, three midfield members, three defense players, and a goalie. Both lacrosse and field hockey are fast-paced sports. They require a great deal of running and endurance. Lacrosse and Field Hockey players are typically physically fit and athletic individuals. Both sports feature a scoring netted goal that is protected by a goalie. Both sports use sticks prominently to move the action of the game. They are both played on a field.

Women and Men’s lacrosse have many differences in the rules of play. Physical contact is the biggest difference between the two sports. Body checking is legal in the men’s game, and it is not in the women’s game. Because the women lacrosse players do not have physical contact in their sport, they do not have need of the amount of protective gear worn in men’s play. Women have two extra players in their game. The pockets on women’s lacrosse sticks have strung nets instead of the mesh nets found in men’s sticks. Women’s lacrosse requires that the top of the ball remain above the sidewall if and when it’s in the pocket. These differences make shooting and stick handling in women’s lacrosse more difficult than in men’s lacrosse. In men’s lacrosse, the field is 110 yards long by 60 years wide. The women’s field is a little bit larger at 120 yards long by 70 yards wide. Women and Men’s Field Hockey have very few differences because field hockey is primarily viewed as a women’s sport in the United States. Men do not have the opportunity to play field hockey in college, but they do have the opportunity to play on the USA International team. Field hockey is used as a Title IX sport in the US to offset the number of men who play football.