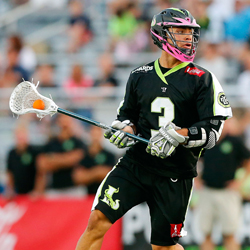 There are plenty of things we cover during GameBreaker Lacrosse Camps each summer, with one of them being how to execute successful fast breaks down the field. This is important because it combines so many different parts of the game into one sequence: teamwork, communication, stick skills, and vision.

An entire team needs to be invested in a successful fast break, starting with the goalie. That may be surprising to some because the goalie doesn’t actually do any running down the field, but there are many occasions where an offensive attack begins with a goalie clearing the ball. This sets the tone from the start, and if done properly, the attackmen and midfielders are able to spread out and make it harder for the opposition to defend the fast break itself.

After the goalie clears the ball and gets it to one of his open teammates, the direction in which they go to execute the fast break takes on a few different iterations. While some may like having a long-stick defender that’s more defensive minded start moving the ball toward the other end of the field, it’s more common to get the ball in the hands of a short-stick midfielder that’s thinking about getting the ball in the back of their opponent’s net.

Getting this done quickly and swiftly will allow an offense to catch defenders off balance, which can create some separation. Once the offense is able to see an opening in the defense, it’s essential to keep pushing up the field and take a shot. If that’s not possible, the other goal would be to find a way to draw a defender away from the net, enabling a teammate to get a clear shot at the net.

As mentioned before, executing a successful fast break is a team effort – not an individual one. GameBreaker Lacrosse campers will not only leave our clinics with better individual skills (like handling their lax stick, shooting, and defending), but they’ll also gain a better understanding of working as part of a team and the concepts that help make their team better. Don’t worry if you don’t come to camp with your lax team – the skills and lessons learned can be transferred to any situation you’ll find yourself in.

And yes, this all happens in a positive and fun environment! We’re looking forward to seeing you at camp this summer so you can gain confidence in performing fast breaks, along with plenty of other skills that are essential to taking that next step as a lacrosse player.