How to Make Lacrosse Practice Fun For Goalies 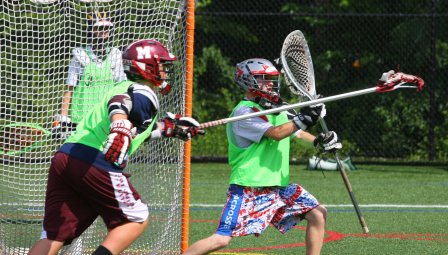 It takes a special kind of person who wants to be a lacrosse goalie. Having that person step forward as a youth player is pretty rare because not only can they take a beating during any given game, practices aren’t all that fun. They spend most of their time at practice in the goal getting pelted by balls for hours upon hours.

No wonder they don’t think it’s fun, right? In order to develop into a great goalie, they need to learn and grow in a positive and fun environment. We keep that in mind for our GameBreaker Lacrosse Camps. All of our Camp Directors know what kind of person it takes to be a successful goalie and still come out of the other side enjoying the game.

Practices for goalies aren’t always going to be fun. There are just certain instances where it’s necessary to step in front of the goal and take a bunch of shots to the body. There are only so many ways for them to physically get better. So, how can you help the unglamorous aspects of being a lax goalie be a little more bearable? Here are some tips.

Scoring a goal in lacrosse is exciting – there are only a handful of times when it happens each game. So, it’s natural to celebrate that. You know what doesn’t get celebrated, though? A goalie making saves. It’s become something they’re just expected to do, and even if they make a real difficult save look easy, the flow of any game doesn’t allow anyone to give them the credit they so rightly deserve. That’s why you should spend as much time as you can in any situation that allows it to make every save a big deal.

If you give the appropriate level of props for the effort and skill needed to make a successful lacrosse save, don’t be surprised if some other players magically become open to giving that particular position a shot.

Based off the uniqueness of the position compared to the rest of a lacrosse team, there are special drills that all lax goalies will have to undergo each practice. That’s just the reality of it. You can make that aspect of their position more fun if you can find a dedicated goalie coach just for them, which will make them feel special and like they’re getting the kind of instruction necessary to really get better.

You can also work them into line drills every so often, so they feel like a part of the team – it’s not fun to always go off and do your special drills when everyone else is doing something. Just because they’re a goalie doesn’t mean they don’t need to have good stick skills. Being included will help break up the normal repetition, which is always a welcome thing.

At the end of the day, having a successful lacrosse goalie who enjoys playing the position takes having the right mentality from the start to finish. It’s not for everyone – if they’re not enjoying themselves, then it’s OK to let them explore other positions and see if another player wants to give goalie a shot.