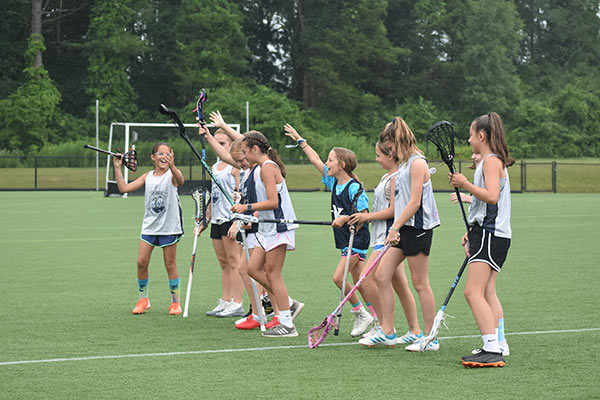 There are certain scoring opportunities in lacrosse that are more advantageous than others. If you’re more of a beginner and aren’t totally sure about what the 8-meter arc is, then we’re here to break it down for you and how it relates to women’s lacrosse.

When an offensive player is fouled during the middle of a lacrosse game, they’re placed at one of the seven hash marks eight meters from the goal that’s the closest spot to where the foul occurred. Players inside the arc must clear out and be at least four meters away from the player who was fouled. The player who committed the foul is directly behind the player with the ball at the hash mark.

Don’t Hold onto The Ball Too Long

Now that you know exactly what this situation is during a lacrosse game, how can you improve your chances of being successful when given this opportunity? This is another aspect of lacrosse that our camp directors and coaches work on with players at all our GameBreaker locations across the country, specifically our Connecticut Lacrosse Camp locations. Here are some tips to keep in mind before you get to camp and can work on improving this part of your game.

This is a pretty simple tip, but it’s also a very important one. The longer you hold onto the ball once the referee blows their whistle to restart play, the more time you’re allowing opposing defenders to get back into position and blocking your clear view of the goal. The more you have a game plan for this situation and the quicker you can let the ball go, the better.

Perfect the Art of Faking Shots

Everything happens so fast on the lacrosse field, so it’s crucial to have some moves in your back pocket in order to give yourself an opening as much as possible. If you’d like to shoot high toward a goal, a general rule of thumb is to typically do so if you’ve successfully faked the goalie into lunging in the other direction. Outside of that, it’s usually better to fake high and then shoot low.

You May Not Have the Best Shot

Sure, you’re the one that got fouled and have the ball at the eight-meter arc, but that doesn’t mean you have to take the shot – this isn’t basketball where the player that gets fouled is forced to the free-throw line no matter what. Before the whistle blows, it’s good to pre-scan the field to see which of your teammates are nearby to see if they potentially have a better angle or opportunity to score a goal. If they do, don’t hesitate in passing the ball their way.