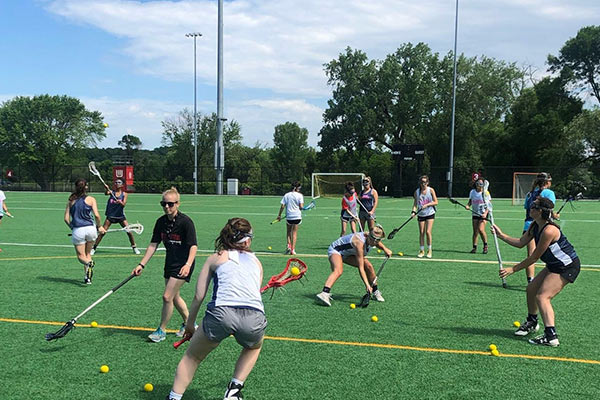 In many things in life – sports included – it’s the smallest of tweaks and adjustments that ends up making the largest difference in whatever you’re trying to accomplish. Lacrosse is no different in this respect, and it’s a big reason why the camp directors at our New Jersey Lacrosse Camps, along with all of our other locations, provide as much individual attention as possible to campers.

It’s just about impossible to see small adjustments that lacrosse players need to make when a large group is all participating in one kind of drill at the same time. Every player is a little bit different and also responds to feedback in various ways. That’s why our GameBreaker Lax Camps are proud to offer the individualized attention to each camper that’s necessary for them to see genuine improvement, along with constantly keeping a low camper-to-coach ratio.

This is crucial for those attending one of our camps that classify themselves as a beginner. Starting to learn and improve in a new sport is fun and exciting because it’s making your mind and body work in different ways, but it’s also overwhelming for all of those same reasons. What happens if you’re a beginner now and you’re not heading to one of our lacrosse camps until the summertime, though? Don’t worry, here are three tips that all lax beginners need to keep in mind as they’re building a strong foundation in the sport as a participant.

The game of lacrosse itself seems like it can be a complicated one, and that can be true depending on how much strategy and effort you put into certain areas of the game. But when you’re first starting out, don’t try and psych yourself out by making things too difficult. Keep it simple by playing short and sharp passes. While trying to hit a teammate with a perfectly-led pass about 50 feet away sounds good in your head, the likelihood of it not going well – especially since you’ve likely never done it before – are very high.

You’re playing on a lacrosse team, which means that everyone needs to be on the same page more times than not in order to experience success on a cumulative basis. The stream of communication should basically be constant throughout an entire game. By talking to each other, it’ll be easier to share who is shadowing who, which players are stepping into a particular position, and making clear calls for the ball when you’re available to do so. Don’t be shy before players who don’t talk much aren’t what coaches and teammates are looking for.

When it comes to how shots or passes can take place on a lacrosse field, there are four basic kinds for a player to choose from: the overhand long shot, the underhand long shot, the sidearm long shot and the backhand shot. Since there are a finite number of shots you can use during a game, it’s a good idea to practice faking shots at different angles and body positions so you can keep your opposition off balanced.