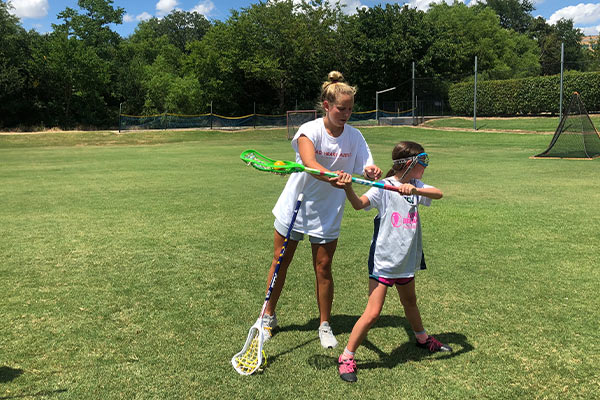 At GameBreaker Lacrosse Camps, our directors make sure to spend time developing the mental and physical side of each player to help them reach the next level the following season and beyond. This is accomplished by bringing in people within the sport who play for national teams, top college programs, and other highly rated educational institutions. What’s really helpful is that they don’t just see themselves as coaches – they are role models representing the game they love, and they want to pass that love and passion down to the generations behind them.

Whether you’re participating in one of our Massachusetts Lacrosse Camps or you’re planning to arrive at one of our many other locations across the country, there are certain aspects of the game all of our coaches work on with campers. Being a new lacrosse player can be super exciting because it’s something new to learn, but it can also be overwhelming for all of those same reasons.

Becoming a good lacrosse player takes a lot of practice and dedication, and with feeling overwhelmed, it may be difficult to know exactly where to start. If you are a beginner in the sport, here are three foundational skills that are important to master before moving on to other skills and drills.

When we watch experienced lacrosse players catching passes from their teammates, it looks rather effortless, and maybe even a little easy. That’s only because they’ve put in so many hours of work in order for it to actually look that way. In reality, successfully catching a lacrosse ball with your stick takes a ton of concentration.

To accomplish this particular skill, you should have one hand at the base of the stick with the other near the throat of the stick. Once the ball makes its way closer to you, position the stick head in such a way that it’s in the ball’s path and it ends up getting dropped into the pocket.

This particular skill is what you need in order to successfully run down the field with the lacrosse ball nestled safely in the net of your stick. To maintain possession of the ball, lax players must have strong wrists that can twist back and forth so the ball remains in the pocket. Committing this to muscle memory is incredibly easy because it can be done while you’re running or standing still.

There will be plenty of loose balls over the course of a lax game and season, so it’s vital that players know how to pick up those loose balls off the ground. That’s where the skill of scooping comes into play, which is the act of picking a ball up off the ground. It’s actually the most commonly used technique to recover balls.