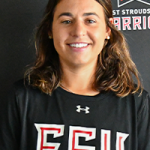 Xeni Barakos-Yoder, a 2011 ESU graduate, has led her alma mater to unprecedented success in her first six seasons as head coach as the Warriors.

She was named IWLCA DII Atlantic Region Coach of the Year in her third season in 2018 after ESU posted its first two NCAA postseason wins in program history - 12-11 vs. Mercyhurst, and 16-14 at previously unbeaten West Chester. The Warriors fell 20-14 to Florida Southern in the semifinals.

She was named PSAC Coach of the Year in both of her first two seasons, compiling a record of 29-8 and twice setting the school record for wins.

ESU's 2017 season (17-3) set nearly every program record and included a 12-game winning streak - featuring seven against nationally-ranked teams - culminating with a 10-9 victory vs. Mercyhurst in the PSAC championship game.

The Warriors won their first-ever PSAC regular season title, PSAC Tournament title and advanced to the NCAA Division II Tournament for the first time. They were ranked No. 10 in the final IWLCA DII poll.

ESU won 11-9 vs. IUP in the PSAC semifinals before capturing the trophy vs. Mercyhurst in the championship game at Whitenight Field. In the NCAA Tournament, the Warriors fell 17-10 vs. Florida Tech in the first round, hosted by Florida Southern.

They were both on the IWLCA All-South Region first team, with sophomore midfielder Emma Rufolo on the second team.

The 2018 season was highlighted by two memorable days at West Chester in the NCAA Tournament, as the Warriors rallied from five goals down vs. Mercyhurst and a four-goal deficit vs. West Chester to win the regional title.

ESU fell 12-11 (OT) vs. Tiffin in the season opener, then rattled off a 13-1 stretch - the only loss 14-7 at West Chester - before falling to Mercyhurst in the PSAC semifinals to earn its spot in the NCAA Tournament.

The Warriors finished No. 5 in the IWLCA DII poll, setting a program best for the second straight year.

In 2019, Barakos-Yoder brought the Warriors back to the NCAA Tournament for the third consecutive season after the team finished at 15-6 overall. The Warriors registered 290 goals during the 2019 campaign as they broke the program record for most in a season for the third straight year. Barakos-Yoder has oversaw the three-highest scoring teams in program history (2017, 2018, 2019).

ESU had three players earn IWLCA All-America recognition in 2019, with Krista Mitarotonda and Tatyana Petteway garnering second team honors and Emma Rufolo earning a third team selection. Mitarotonda, Petteway and Rufolo, along with TJ Jefferis and Hana Cicerelle earned All-Region First Team honors, as the Warriors were one of only two teams in Division II to have five players garner All-Region accolades.

Barakos-Yoder also helped those same five players earn All-PSAC honors, with four of them being named to the first team.

Mitarotonda's 61 goals during the 2019 campaign were the third-most in a season in program history, as she became the first-ever ESU player to tally 60 or more goals in multiple seasons. Petteway finished with the highest save percentage (.548) among all goalies at the Division II level.

The Warriors were ranked No. 16 in the final IWLCA Poll of the season, as they finished the year among the top-20 for the fourth consecutive season.

In 2020, Barakos-Yoder's Warriors were off to a solid 4-1 start and ranked 12th in Division II before the season was cut short due to the COVID-19 pandemic. ESU won each of its opening four contests, including a victory over 16th-ranked Saint Leo, before dropping its lone contest to fifth-ranked Lindenwood.

Barakos-Yoder, a former All-PSAC defender for the Warriors, returned to ESU following three years as an assistant collegiate coach. She was assistant coach at Millersville in 2015 following two seasons at Albright College in 2013 and 2014.

As a player at ESU, Barakos-Yoder was named to the All-PSAC third team as a senior in 2011. The Warriors posted a 16-8 win at nationally-ranked Gannon in the PSAC quarterfinals for ESU’s first postseason win since 1986.

Barakos-Yoder graduated from ESU in 2011 with a bachelor’s degree in Media Communications and Technology, and she recently received earned her master's degree from California (PA) in athletic administration.

In addition to her collegiate coaching experience, Barakos-Yoder worked as director of girls’ lacrosse at Body Zone Sports and Wellness Complex in Wyomissing following her graduation from ESU. She was also program director of LANCO Elite Lacrosse Club in Lancaster.

In 2015 at Millersville, Barakos assisted head coach Mia Hall and helped Sabrina Fusco earn PSAC Freshman of the Year honors with 52 goals. Hannah Vogel set school records in assists in both a season (31) and career (61).

At Albright, the Lions were named the most improved team in Division III in 2013 by laxpower.com and had three All-Commonwealth Conference selections.

Defense- including a rotation of midfielders
Footwork - pivoting, recovery and angles
Stickwork - clearing, carrying, grounds balls and stick protection
Field Awareness - man up or man down situations, on and off ball defensive play
Body Positioning - ABCDs of defense (for 1 on 1 defense)

Grouped Position Specific Training- Attack vs. Defense, Midfield vs. Midfield
1v1’s, 2v2’s 3v3’s, 4v4’s– from all positions on the field focusing in
on specific game philosophy’s, techniques and spatial awareness

*Curriculum Varies Per Location and Director* 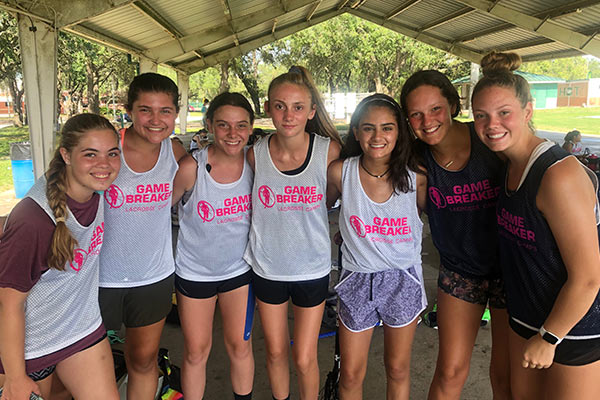