The Winter Academy Training is designed to provide lacrosse instruction for girls and will be held at Oakwood Soccer Club in Glastonbury, CT. These sessions will be focused on individual skill development - positional training, shooting, dodging, defense, offensive and defensive strategies/scenarios, goalie play, as well as team offensive and defensive concepts. Our coaching staff is invested in the individual training and growth of each player.  We will develop elite players in a challenging and exciting atmosphere where leadership and teamwork will be expected of all players. On top of the hour-long on-field sessions, there will be classroom sessions devoted to film breakdown and X's and O's. It is our hope that each player can carry their love of the sport with them and always strive to reach their highest potential, both on and off the field. 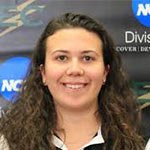 Current Assistant Coach at Eastern CT State University and a former four-year member of the Eastern women’s lacrosse program from 2014 through 2017, Riccobono enjoyed a successful two-year head women’s lacrosse coaching debut at Division III Elms College, where the Queens, NY native led the Blazers to an overall record of 20-17, 11-2 in the New England Collegiate Conference (NECC). In her rookie season, Riccobono directed the program to a perfect 7-0 record in the NECC, the program’s first NECC playoff championship, and a berth in the NCAA tournament. For her efforts, she was honored as the 2018 NECC Coach-of-the-Year.

Prior to appointment at Elms, Riccobono served as assistant women’s lacrosse coach at SUNY Purchase College in the fall of 2017.

At Eastern, Riccobono appeared in 29 matches with 16 starts, starting all 14 matches in which she appeared as a freshman defender. She was a strong defender who was a senior member of the undefeated Little East Conference regular-season championship team (6-0) which finished 14-5 overall.