What’s Included
• 2 separate one-hour group sessions
• 1st one-hour group session- May 29th and June 2nd, 4:00pm to 5:00pm (est)
• 2nd one-hour group session- Saturday, May 16th, 4:00pm to 5:00pm (est)
• An hour-long question and answer session with the clinic presenter following the last group session
• Fitness workouts and lessons
• Interactive experience with the opportunity to ask questions before, during and after the camp
• Interactive camp classroom setting with live feedback, Q & A, content sharing, and messaging
• A drill guide including all drills that were reviewed in the group lesson along with step by step instructions on how to replicate the drill on your own

What You Will Need
• 8x8 area, inside or outside
• An email account so we can add you to the Interactive Camp Classroom
• Stick, Gloves 10 Lacrosse Balls or Tennis Balls
• Wifi and a computer with a camera, Ipad or Smart Phone
• Ability to Download Zoom app or access Zoom Webinar through your computer

How The Camp Will Work
Once registered, you will receive an email with the details on how to access the camp classroom. Once joined, you will have access to the camp’s content and directions on how to join the live virtual camp and chat. 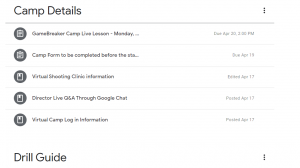 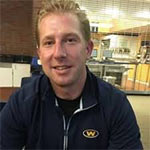 Coach Wiser is currently the Head Coach of Bunnell High School in Stratford. He He previously served on the coaching staff of Weston High School for three seasons, as the Trojans made a trio of state tournament runs along with an SWC Championship game appearance in 2016. Prior to his time in Weston, Wiser was the Head Coach at Southern Connecticut State University, while thru the years he has coached various lower and middle school teams. His introduction to the coaching ranks began at his alma mater, Ohio Wesleyan University, where he served as an assistant for one season following his graduation from OWU.

An All-Conference midfielder in High School, Coach Wiser played football, basketball, soccer and lacrosse while attending Fairfield Prep and Greens Farms Academy. He was recruited to play Lacrosse for Ohio Wesleyan University, where under the guidance of Coach Lelan Rogers (current Syracuse University D-Coordinator) he made the transition from offensive midfielder to LSM/Defense. Wiser earned All-Conference honors in both his junior and senior years for an Ohio Wesleyan squad that was highly ranked on the national stage, netting four consecutive NCAA tournament appearances, three North Coast Athletic Conference (NCAC) titles, and one Final Four appearance during his four years on campus. Along the way, he tied a school record at the time with most assists by a long pole (ten) in a single season.  A Fairfield resident, Coach Wiser is very active within Youth Lacrosse, serving as a Director for Gamebreaker Lacrosse Camps while also privately training players of all ages and skill levels throughout Connecticut.