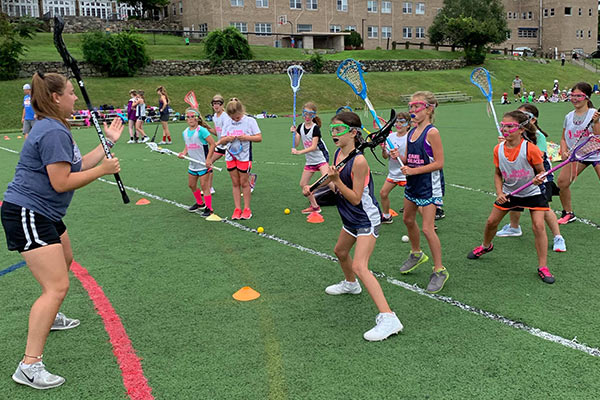 While a foundational part of a successful lacrosse player and team involves scoring more goals than your opponent, it’s just about impossible to do that all by yourself. After all, that’s why you’re part of a lax team! Working together as a unit makes it easier to keep the ball away from your opponents and seamlessly moving it down the field so players on the attack can do what they do best – score goals.

At GameBreaker Lacrosse Camps, players in attendance receive individualized lax training through the progressive curriculum we’ve put together. It can get boring to just run a bunch of lax drills over and over again in big groups. At all of our locations, including our Connecticut Lacrosse Camps, we have 10 specific skill clinics that ensure every aspect of improving your lacrosse game is covered.

This is what we call the GameBreaker Difference. The skills we focus on in each of these clinics include the following: defense (team and individual), ground balls, dodging, shooting, fast breaks, triangle offense, stick skills, clears, man up and man down, and face-off and wing play.

With a number of these specific skill clinics, passing is a key skill that’s needed to help complete the drills, and specifically, being a good passer is needed to run a triangle offense and fast breaks, along with being adept at clears and wing play.

Most youth lacrosse teams begin each practice with a series of line drills to get into a groove. This provides an awesome chance for players to focus on and improve the basic techniques and skills that they’ve already learned. After all, just because you’ve already learned a certain skill or technique doesn’t mean you can stop paying attention to it. With that in mind, here are two lacrosse passing drills that can help you keep this area of your game sharp.

This particular drill is probably the most popular of all the passing drills that are out there in the youth lax circuit. Coaches need to break their teams down into four different lines and face each other on the opposite ends of a square area. Each group of players is spaced about 10-20 yards apart (when considering their skill level).

This is a fun drill to run during lax practice because it basically simulates a full-field scrimmage. Break up your roster into two 10-person teams, but make sure it’s known that a player is only allowed to hold onto the ball for no more than five seconds at a time. If they’re unable to pass to another teammate or shoot on the goal, it counts as a turnover and the other team gains possession. This helps teach players to keep a quick tempo on the field, which also helps increase scoring activities.